Rob and Fran Parker are the founders and Directors of the National House of Prayer (NHOP).

They heard the call to create an “Embassy of Prayer” in the nation’s capital on Canada Day – July 1st, 2000 after Rob had made a 73 day Prayer Walk from Calgary to Ottawa.  After several years of sharing the vision with other leaders across the nation they moved to the capital in 2004 to begin establishing a ministry that would mobilize prayer for government. 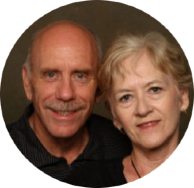 At the beginning of this year Rob felt impressed to write a short booklet on the importance of the Canadian Church having a voice through voting. This is written from a non-partisan perspective and seeks to bring a biblical perspective on voting and some important issues that Christians need to be reminded of in Canada

Rob is originally from Victoria, B.C. and had a career as a paramedic working both in the Canadian Arctic and the Saharan desert before studying at Queen’s University in Belfast, Northern Ireland and returning to pastor a church in his home city.